The Monkey Island Series: The Best Games Ever Created! 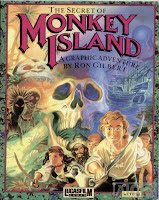 I'm sure any child growing up in the 90s will remember Monkey Island. Monkey Island 1, released in 1990 by LucasArts, is to this day, the best adventure game ever created. Lucasarts is well known for other adventure games such as "The Day of the Tentacle", "Maniac Mansion", "Full Throttle", "Dig", "Indiana Jones and the Fate of Atlantis", "Grim Fandango" and much much more, but none will influence the world as Monkey Island has. Pirates, Treasure, Love, Glory! What more can one want other than names such as Guybrush Threepwood and his arch enemy the pirate LeChuck. Not only is the gameplay terriffic, the script is entertaining, the plot is gripping and the characters superb!

Plenty of websites have been dedicated to this game with fanart, fangames and the discussion of the release of Monkey Island 5! Will it ever happen? If you have not played this game I would strongly recommend it to anyone: to children, to adults and to people of all ages. Hearing the soundtrack today still brings a tear to my eye and fills the room with an unforgettable atmosphere. Filled with Insult-Sword Fighting ("I've spoken with apes more polite than you."
"I'm glad to hear you attended your family reunion.") this game is perfect for any one searching for a few laughs and adventure! 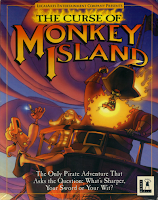 This year I'm going to the Edinburgh Fringe Festival for the first time. I'm going as stage manager for "Bouncy Castle Dracula" which will be showing at Rocket @ Demarco Roxy Art House. If any of you are planning to attend or even visit the festival then you should definitely go and check this show out. It's the third show in the bouncy castle series - after "Bouncy Castle Hamlet" and "Bouncy Castle Macbeth" that were performed in the previous Edinburgh festivals. "Bouncy Castle Macbeth" was even part of Britain's got talent in 2008! The idea for the show came about from the Strolling Theatricals, a British theatre company that is located primarily in York. More information about the founder, William Seaward, and the company are available on this website:

The cast and crew of "Bouncy Castle Dracula" are as follows: (AND MYSPACE PAGE FOR THE PERFORMANCE)
http://www.myspace.com/bouncycastledracula

Production Crew
Cast
Buy your tickets at the offical Edinburgh Fringe website NOW and leave us your comments if you do come see it! :
http://www.edfringe.com/shows/detail.php?action=shows&id=1703
Posted by Melissa C at 3:39 PM No comments: 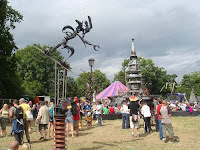 My first festival experience and what an experience it was! From sleeping at 5am with music still blaring out from across the ground, to waking up at 7am because of the heat in the tent, the experience of the toilets (especially the she-pees...some bad times), the lack of showering (or wet-wipe showers in fact), from walking around and seeing any colour and shape and form around, to great shows and absolutely brilliant music, to campfires and ready-to-go bbqs...i think this was one of the happiest and most peaceful times of my life. Here are a few photos. And you got be sure I'll be going every year from now on if I can! =) 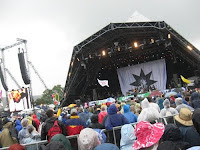 My review on Sexing the Cherry by Jeanette Winterson on the Yorker website. (Student paper)

Sexing the Cherry is a vibrant novel that explores the delicacies of human nature through crossing the strict boundaries of space, time and gender that are so readily accepted in today's society.

Set in the seventeenth century around the beheading of Charles I and the Puritan revolution, the novel sets out to discover the confusing relationships between human beings and to transcend all stereotypical views. In this novel, Jeanette Winterson truly captures the essence of love and discovery.

The work mainly focuses on the relationship between Jordan, an explorer, and his mother Dog-Woman, a large and physically grotesque woman. With elements of magical realism and with the twisting of traditional fairy tales such as The Twelve Dancing Princesses, the novel delves into the absurdity of life. Jordan constantly searches for his “love” - one of the Twelve Dancing Princesses - while his mother constantly awaits his return. It seems there is a discovery to be made for the readers as well as the characters. One never knows which direction life will lead and must somehow be open to all possibilities. This is the message that Winterson attempts to put across: even though Jordan finds his love while on his explorations, he is rejected and it is this rejection that allows possibilities to flourish.

Winterson depicts her characters in unconventional ways. As the novel progresses the reader comes to accept, and even embrace, the unconventional portrayals as Winterson surpasses ideas of conformity and social acceptance. Dog-Woman’s ugly appearance and the murdering princesses in particular allow the reader to embrace things that at first they would perhaps be averse to.

Elements of feminism are present in the novel as most female characters are presented as stronger than their male counterparts. Furthermore, Jordan is also depicted as a figure searching for his feminine side and portrayed as loving and attached to his grotesque mother. These subtleties allow any reader to question social values that seem to lose more and more importance as the novel develops.

Winterson herself states that: “I wanted to build another word-dependent world, not restricted either by realism or contemporaneity.” Her reason for setting the piece in the past is exactly for this: to escape reality and portray a world which is free of all restraints.

Readers must be prepared for a magical journey full of descriptions of the colourful intricacies and depictions of the beauties of life. These are brought to life through Winterson’s imaginative metaphors of juicy fruits – which are used as pathways to exotic and unknown lands.
Posted by Melissa C at 2:09 PM No comments:

This novel by Scarlett Thomas was a very exciting read. It's about a PHD student who finds a very rare book that is supposedly cursed. She stumbles upon the book in a second-hand book store and from then on the novel revolves around this character and her unexpected journey. It explores the ideas of the intricacies of consciousness, the theories of the beginning of the universe and provides references that allow the reader to want to go and research alchemy, quantum physics and symbolology! =) That said, I recommend this book to anyone who wants another perspective on life and who wants to venture into the unknown.